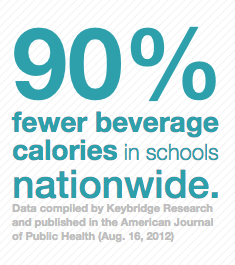 calorie sodas from schools and replaced them with a range of lower-calorie, nutritious, smaller-portion choices. The School Beverage Guidelines are a national standard that is in place and working. The beverage industry has worked with the Alliance for a Healthier Generation and its school partners to accomplish a change in school nutrition.

On August 16, 2012, Dr. Wescott, along with his co-authors, had a peer-reviewed data analysis published in the American Journal of Public Health. The data, which was updated to go through the end of the 2009-2010 school year, shows that industry continues to deliver in schools across America:

*Data compiled by Keybridge Research and published in the American Journal of Public Health (Aug. 16, 2012)